Finally we have Plan9 kernel up and running on OLPC ! Here is the screen shot 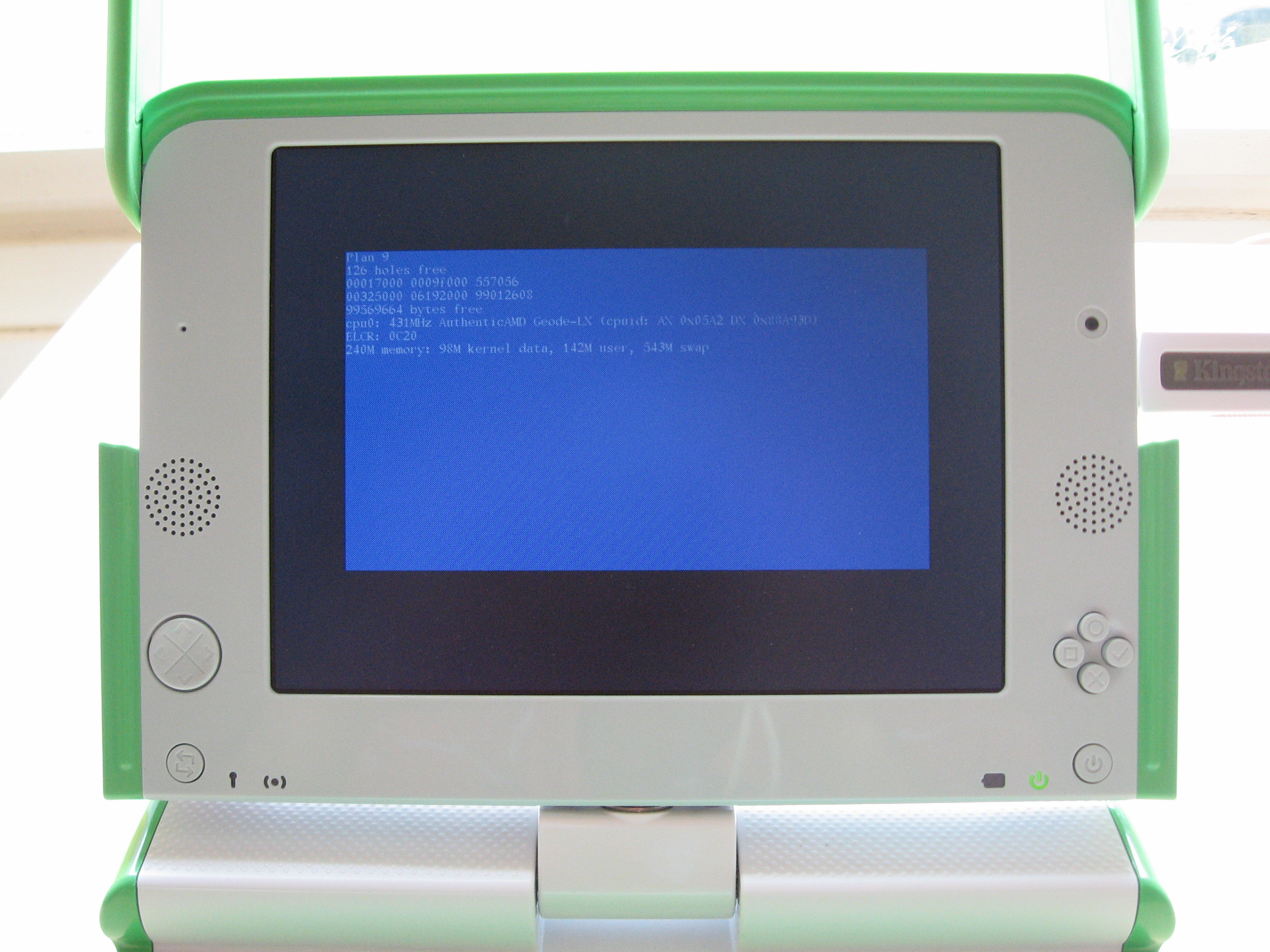 Today I fixed OLPC crash problem. Problem is with lowraminit() function in memory.c Plan9 reads BIOS data area to figure out free memory below 640 K. But since OLPC doesn’t have a PC BIOS, I have modified the OLPC loader to write to BIOS data area that 639 KB is free.

Also I have updated x86amd table in devarch.c I have added Geode-LX processor entry to this table. So that Plan9 will be able to detect Geode processor correctly.

I have created a small forth boot script to automate booting of plan9 kernel on OLPC. You need to create /boot directory on USB thumb drive and copy olpc.fth to /boot.

Once open firmware sees disk:/boot/olpc.fth file it will execute this script as part of its automated boot sequence.

l.s - Here we need to make a new 4 MB page table entry for mapping OLPC’s linear framebuffer. Also instead of calling main, olpc_display_init is called which prints Plan9 on screen using EGA emulation code. After that HLT is called so that machine won’t reboot.

Finally Plan9 kernel is up and running on OLPC !!

Here is the complete procedure to boot plan9 on OLPC:

And you should see Plan9 printed on screen !!
Currently it only prints plan9, as there is no proper display driver.

Today I decided to leave plan9 ELF booting effort. Plan9 linker’s ELF output is not correct. This is creating lot of problems.

So now I am going to write custom boot loader for plan9’s kernel.

First thing i need to do is to understand plan9 kernel’s format.

Here is the information that i got from a.out.h:

I wrote a simple C program to read plan9 kernel image and print above information from it.

Also another important thing that I found out is that, this header is in big endian format, so on x86 architecture we need to swap data to read it correctly.

For OLPC we are using ELF format. OLPC’s open firmware determines start address of ELF’s txt section from ELF header. If we compile kernel in ELF format and ask linker to link its txt section at 0xF0100020 address, then OFW gives page fault, since this address is not present physically and its not mapped in current page tables.

I am linking ELF kernel at physical address 0x100020. So its loaded correctly by OFW loader. But once control is transferred to plan9 kernel, kernel code expects all address above 0xF0100020. So this is the main problem which needs to be solved.

Today i read the code in 9load’s l.s file. I wanted to get information about the way 9load sets up paging for plan9 kernel.

I figured out that 9load turns on paging. It identity maps first 16 MB of memory to 2 GB and above it.

I find this quite odd, normally bootloader never uses paging, when kernel gets control it sets up the page tables.

Now my next task is to check the startup code in kernel, and figure out how it uses this mapping, and if possible remove dependency from 9loads memory mapping.

Today I got the B4 laptop. Its very fast compared to previous B1 machine. OLPC is making impressive progress.

I also completed reading about paging and plan9 compiler and assembler papers.

I found out that plan9 kernel startup point is in l.s file.
9load enables paging and maps first 16 MB of RAM identity mapped.
OFW doesn’t support this. Also plan9 assembly is somewhat different than GNU or Intel assembly. Looking at this issue I think I need to read following things first before proceeding further:

While handling control to Operating System; OFW passes address of client interface handler in register EAX. So in Plan9 kernel we need to copy this value from EAX and store it in a variable. And we need to do this before somebody else overwrites EAX register.

To execute this program, copy it to USB disk. Attached this USB disk to OLPC and boot the laptop. You need to press ‘x’ key in game pad to interrupt the booting sequence. After this you need to press Esc key to enter to open firmware boot prompt. Once you are at open firmware boot prompt execute following command to check whether USB disk is detected properly and appropriate FS driver is loaded.

This command should print out contents of USB disk’s root directory.

Now you need to tell open firmware (OFW) that you want to load 8.out from USB disk and execute it. Execute following command,

OFW by default resets USB system just before handling over control to new kernel. If you need to turn off that behaviour then you should execute following command,

After this you can boot 8.out by executing command,

Some other useful OFW commands,

reset-all = To reset all hardware and reboot
power-off = Shutdown
print-env = Prints all the Environment
dev / = Sets to root of device tree, after this you can use ls command to print the tree.
.properties = Prints properties of the selected node.

I want to documents some tips here, which are quite useful.

Create a 1.44 MB floppy image in linux, format it with FAT FS. Use it as 1st floppy disk in qemu.
In Plan9, use following commands to access it:
a:
cd /n/a:

One typically needs to add u.h and libc.h files as headers for C programs.

To compile kernel in ELF format I modified /sys/src/9/pc/mkfile and added -H5 option to $(LD) command.

Have made some progress with the gsoc.cat-v.org site and setup, a handful of brave souls have got accounts already, and i hope that most of the work left is to add some real content (I hope others will help out with that ;))

While fixing a bug in the blog code (all six lines of it), I found a neat trick: Given a list of paths, how to list the full paths of all files in those dirs ordered by file name:

Enough for today, when I wake up I should announce the site to the gsoc list and try to setup an irc meeting for tomorrow so we can get things going. Thanks to everyone that helped debug and test things.